The theme of this year’s Refugee Week is ‘we cannot walk alone’; a phrase taken from Martin Luther King’s I Have a Dream speech. The idea that the fight for freedom is not an individual one, but a collective one, means that solidarity is essential in making lasting change. Until everyone is free, no one is free. This interdependence has become increasingly visible during the pandemic, and is no longer an abstract idea but a stark, lived reality. This is especially true for refugee and asylum seeking communities, for whom networks of solidarity are essential to survival. This room documents what it means to stand in solidarity. As put by the organisers of Refugee Week, this is part of developing a ‘bold, collective act of reaching out; a space for us all to listen, to exchange and connect. To find out what we can learn from each other, and what we can build together’. 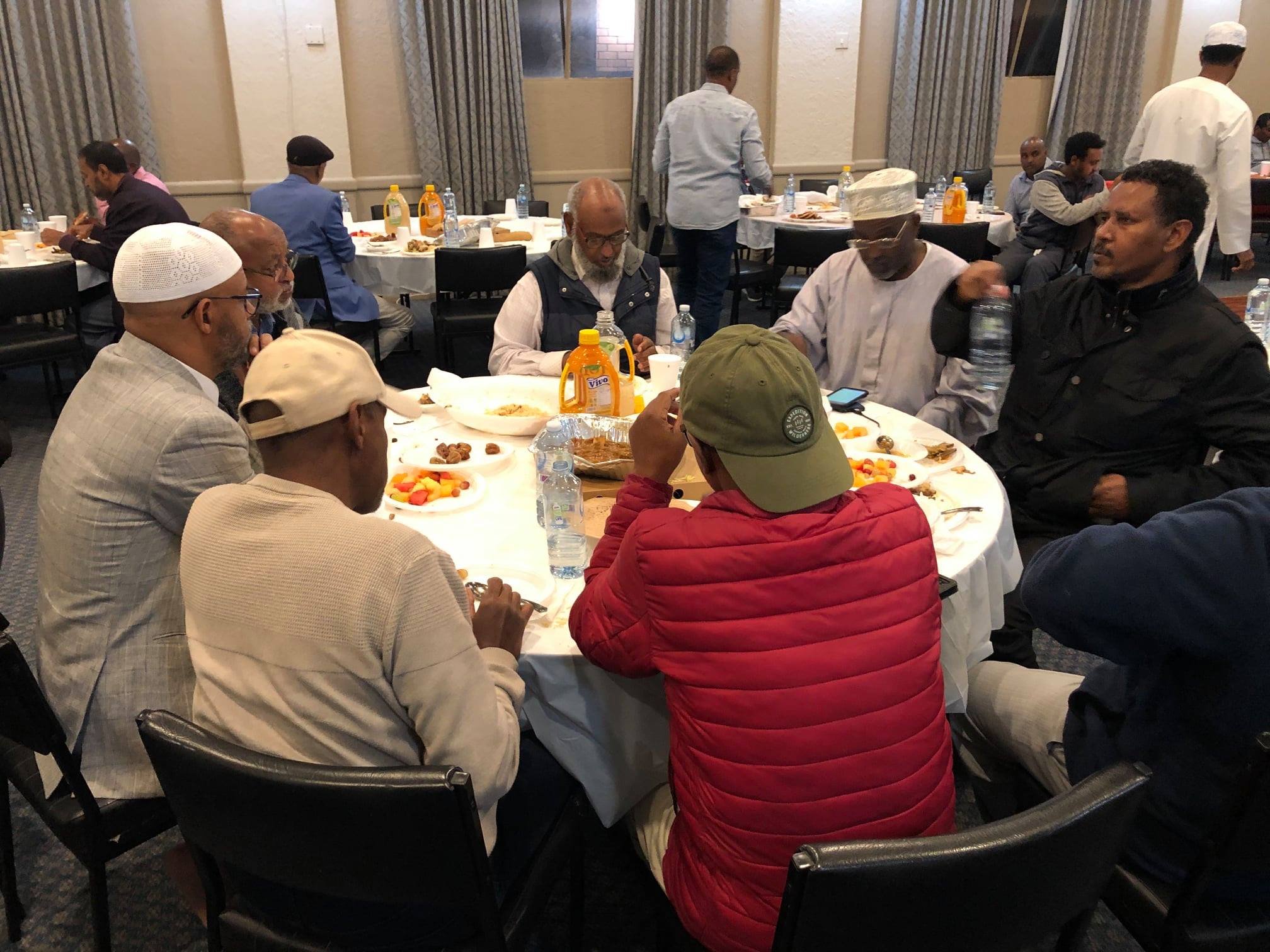 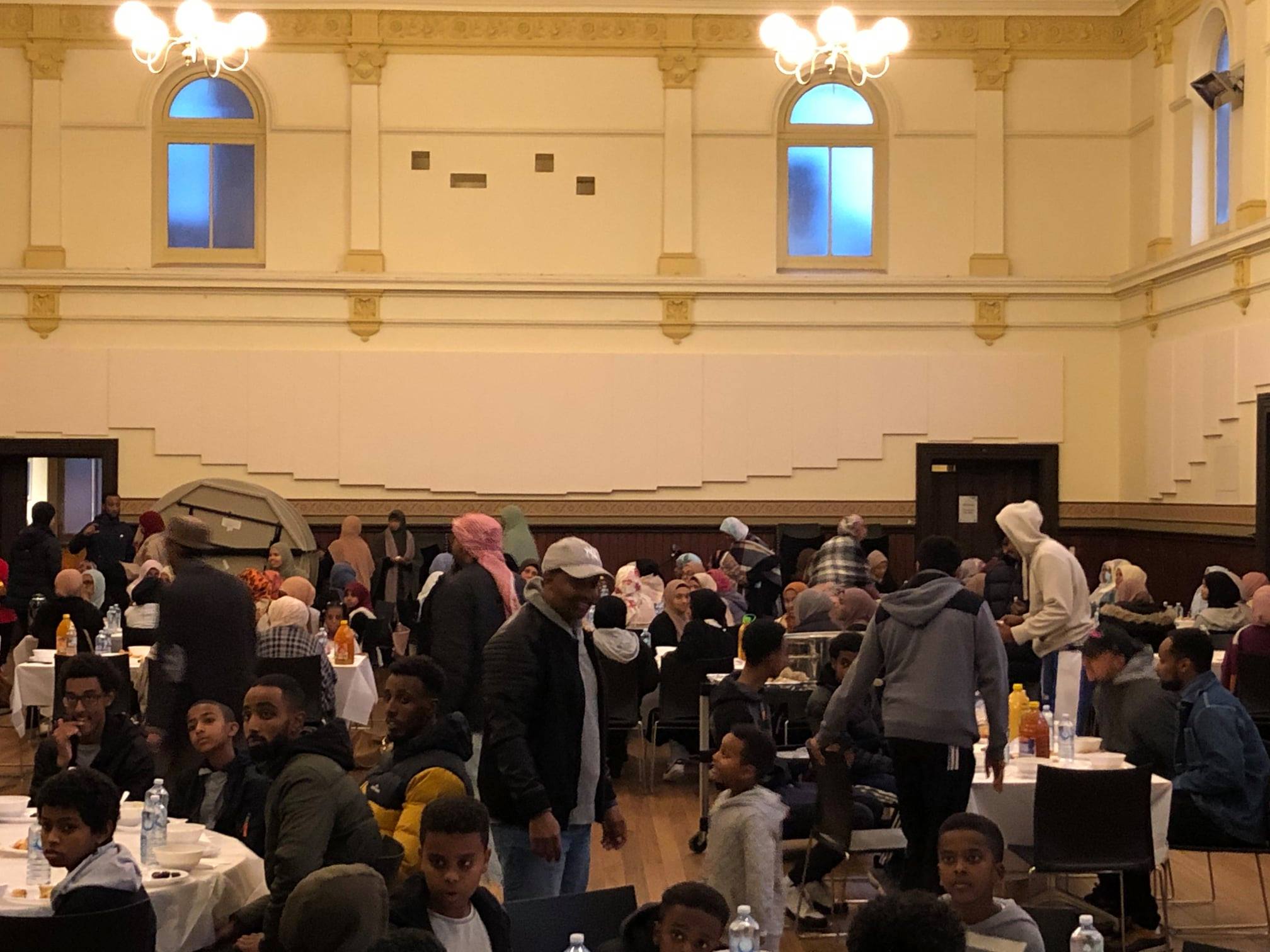 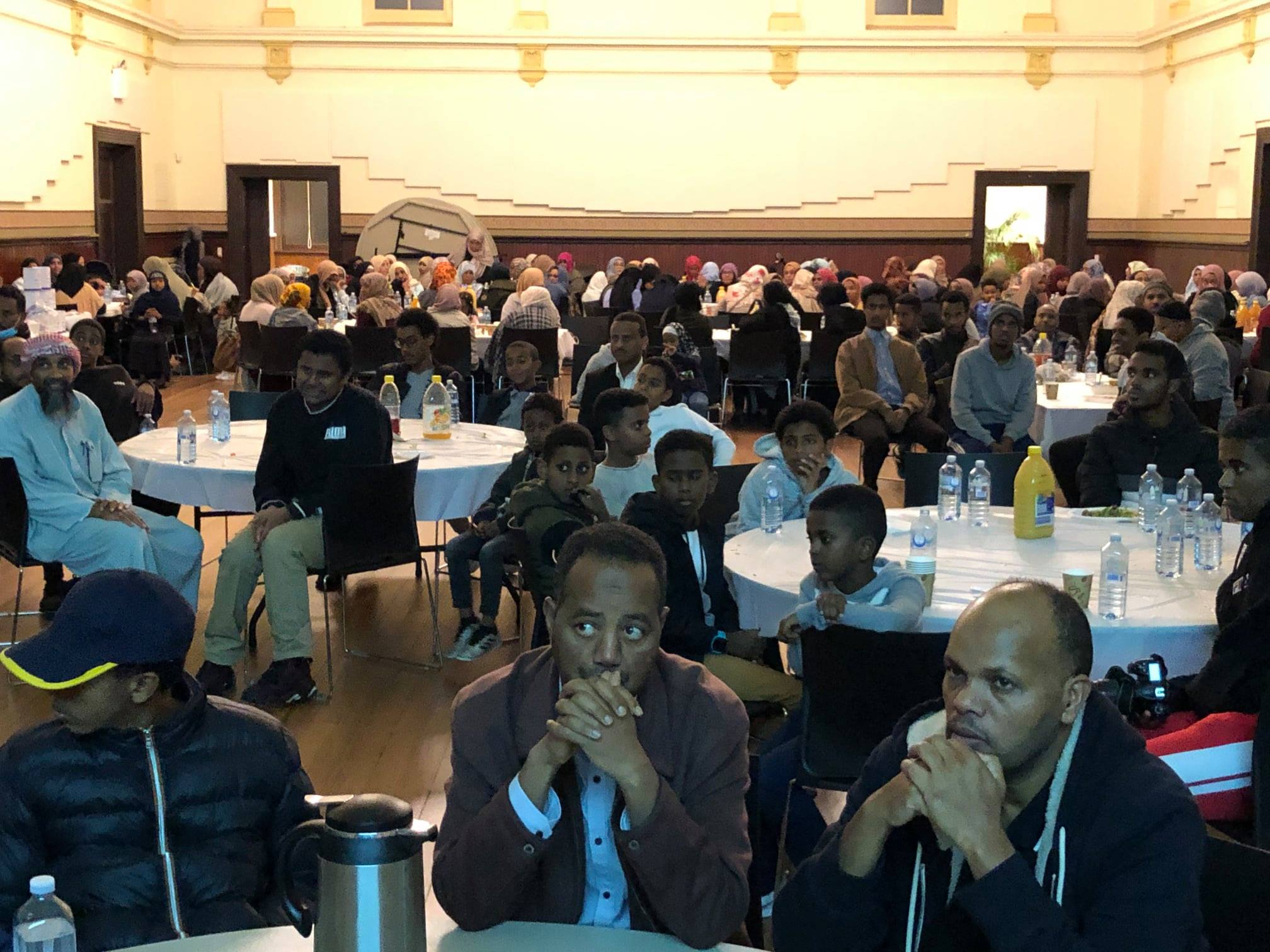 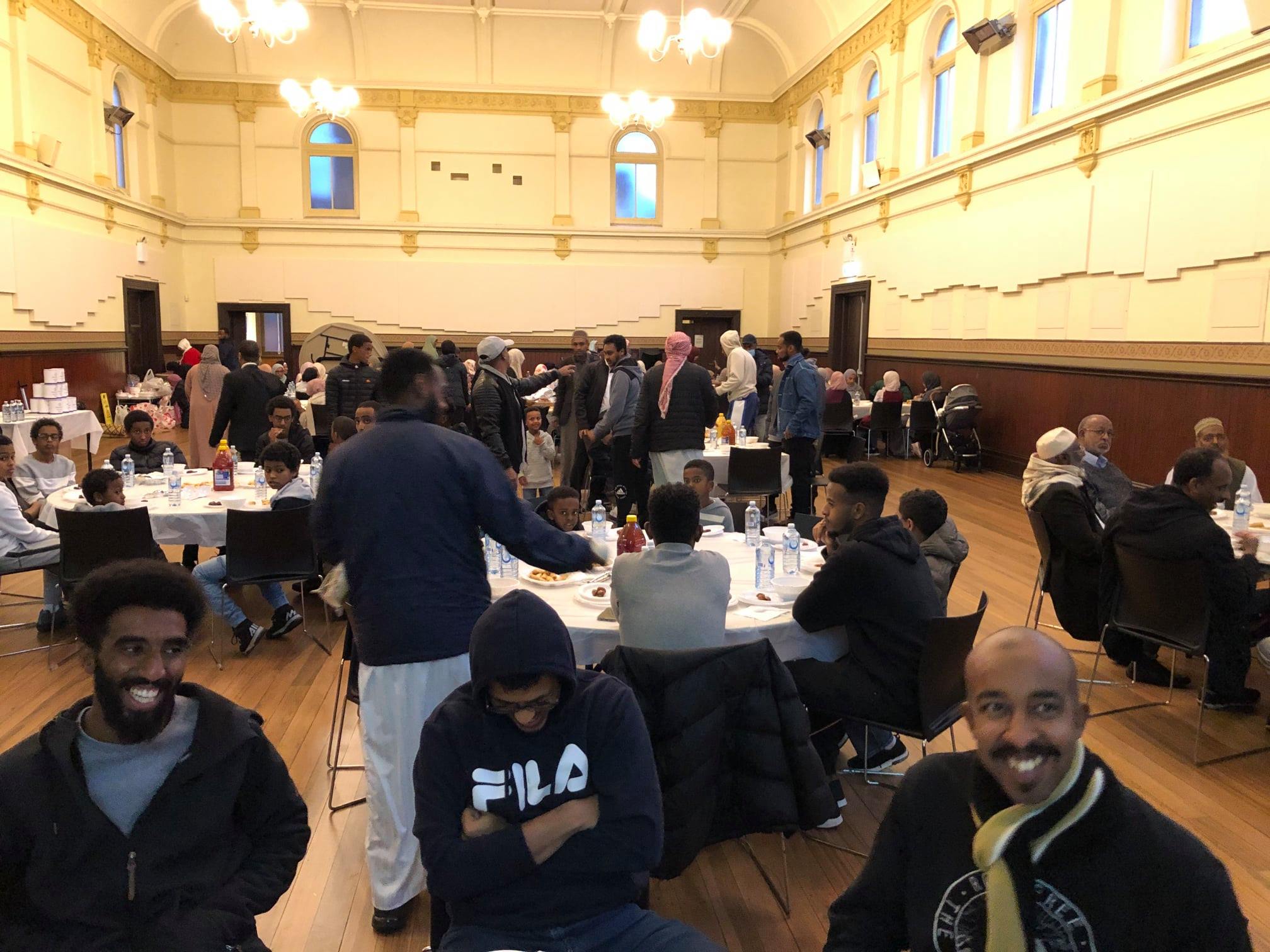 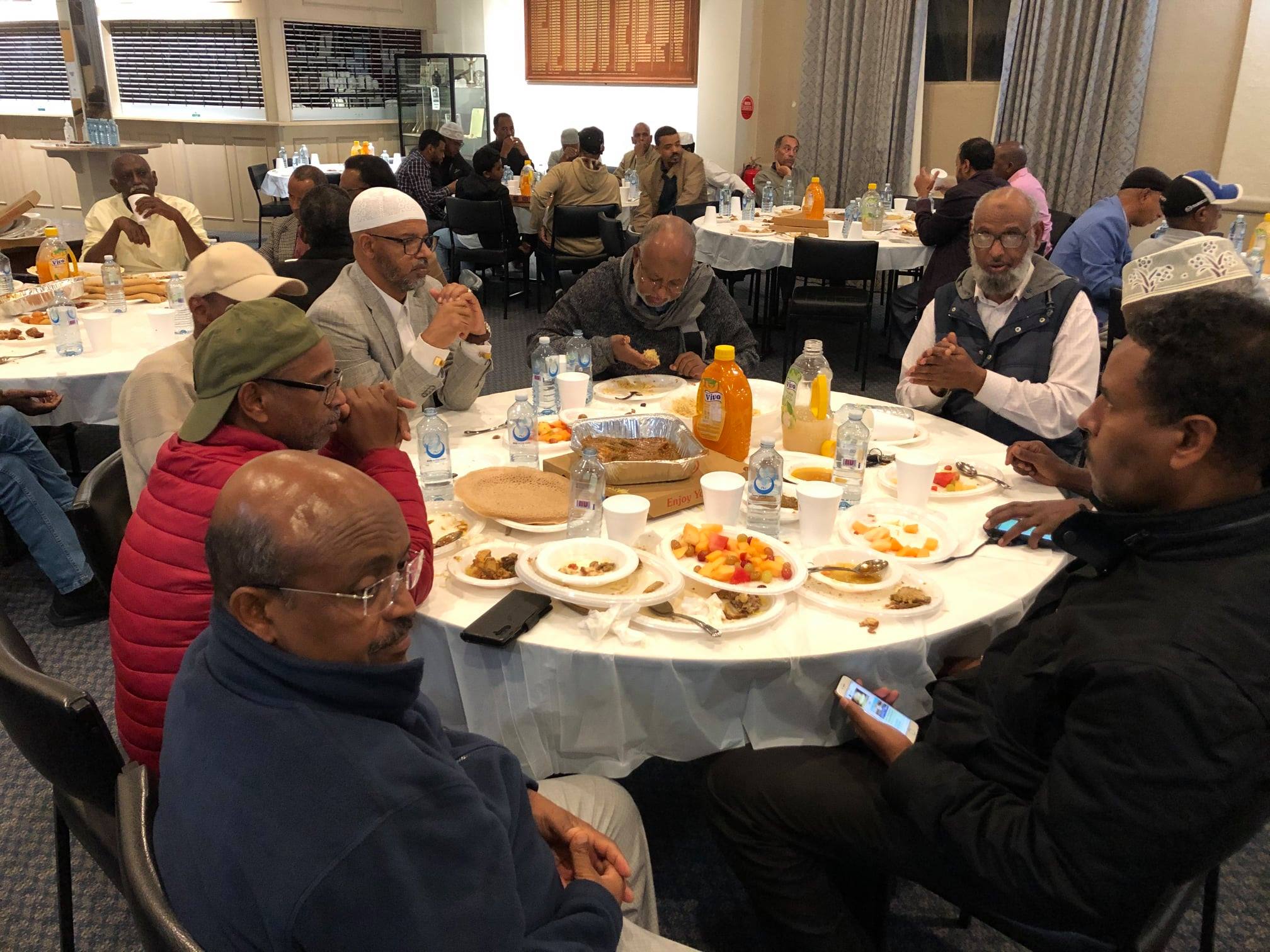 01: Members of the Eritrean community coming together during Ramadan in Melbourne, Australia, to break fast.

Members of the Eritrean society gathered together this year to break their fast during Ramadan. This tradition has persisted for many years, continuing the community’s cooperation in social and national projects, and strengthening bonds between its members and their families in Eritrea and with the Eritrean diaspora.

The Eritrean Islamic Association organised its annual breakfast, which was attended by hundreds of people who collectively donated more than sixty thousand dollars. The center sends this money to Eritrean refugee camps through a charity in Sudan. The group has been active since the mid-nineties, and continues to participate in social, religious and educational areas.

Despite the challenges brought on by the pandemic, the community has come together, especially during Ramadan, to support one another and help those in need.

02: Nothing Matters, by Dalmar Hamid Ali.

03: Nicola Sturgeon, First Minister of Scotland, wished Adnan Shamdin’s mother a speedy recovery after she contracted Covid-19. Adnan is a Syrian Kurdish refugee who resettled in Scotland in 2017.

04: Ibrahim al-Haj describes his experience of seeking asylum in the UK during the Covid-19 pandemic.

“We can only keep repeating: no more camps, no more Morias. European governments must put an end to these policies that are designed to make life as unbearable as possible for people who arrive at our borders. European governments must stop and condemn the ongoing violence inflicted on people at our borders. And under Covid we must care for all. Let's treat people like people. It's really not that complicated.”

05: A Kurdish asylum seeker had a personal initiative to clean his local environment in London during lockdown.

“While we’re struggling for integration into society, Ritsona Camp of the Greek mainland is going to be changed to a closed camp with 3 metre high walls all around it. After Diavata camp, it is now Ritsona 's turn. If we stay silent, all refugee camps in Europe will be turned into detention centres.

I’m afraid to wake up one day in Ritsona Camp and see a wall all around. These walls show us that we are isolated, detained in a prison and excluded from the right to integrate into society. Let’s stand against it and give us the chance to live freely.

We strongly stand against allocating European funds to build walls around Greek refugee camps. The ongoing fencing work at the Ritsona, Polykastro, Diavata, Malakasa and Nea Kavala camps must stop immediately. Greece, with the full support of the European Union, is turning refugee camps into de-facto prisons. Millions of euros allocated for building walls should be spent on education, psychological support and the improvement of hygienic conditions in the refugee camps.”

06: Parwana Amiri, a refugee living in Greece, documents walls being built around the Ritsona Camp. 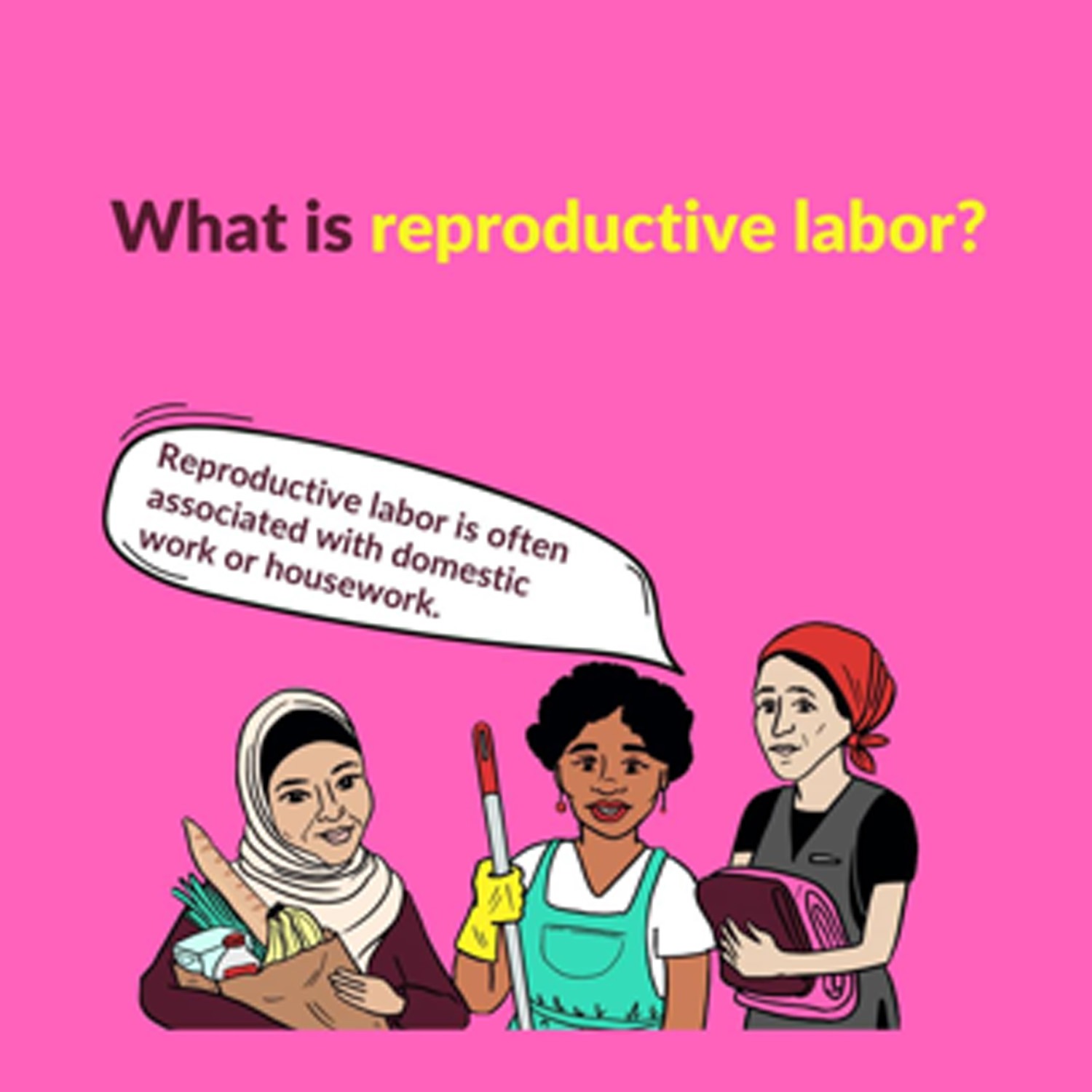 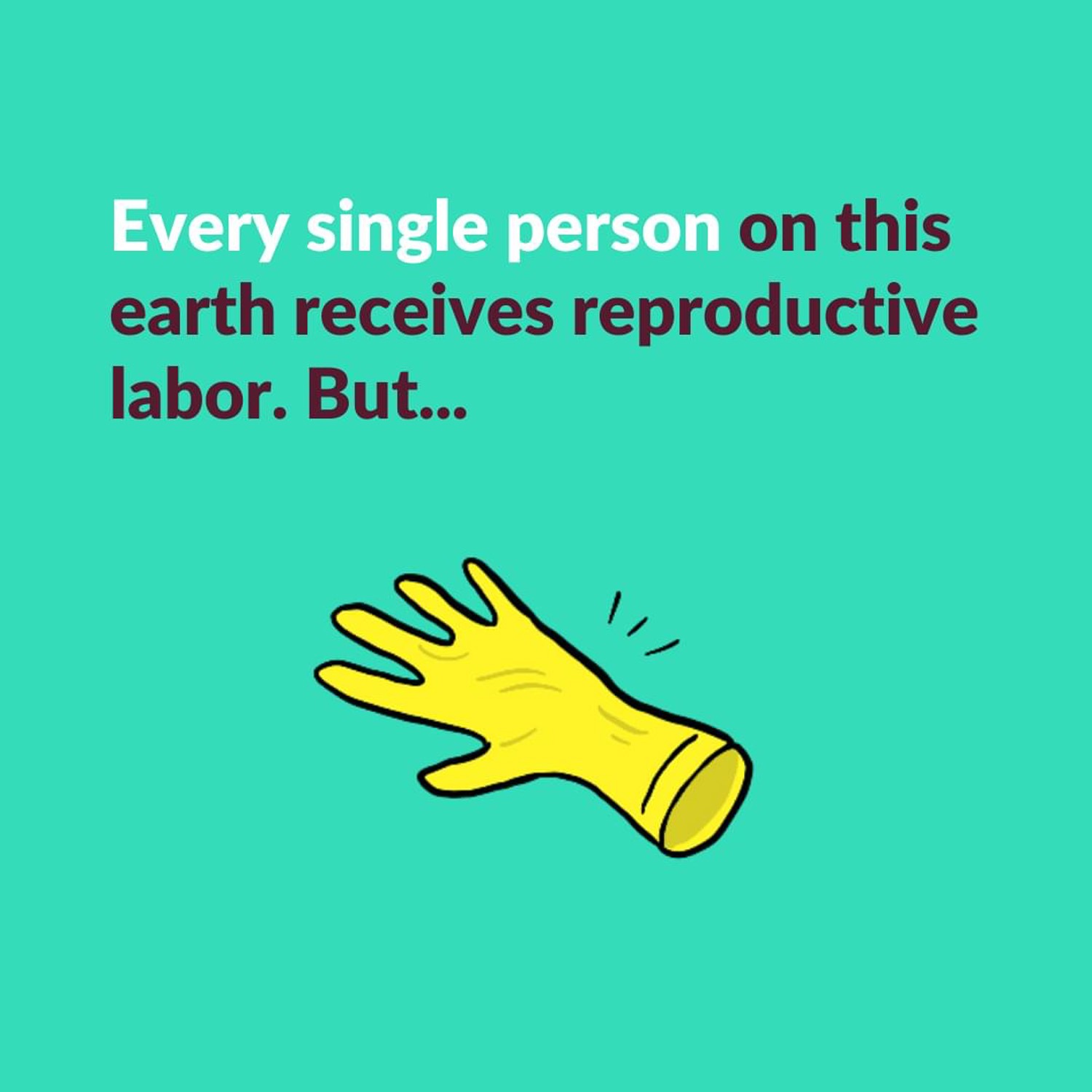 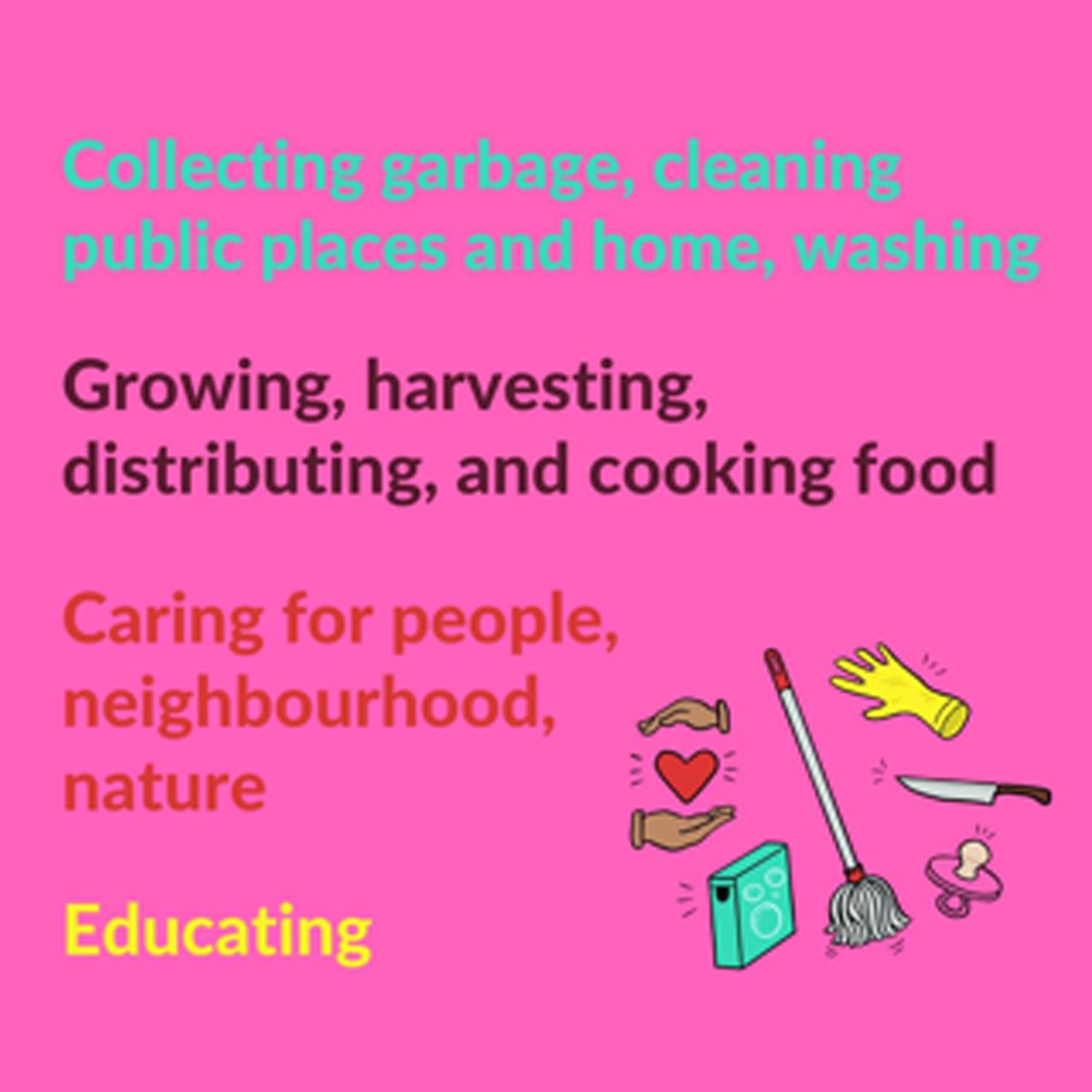 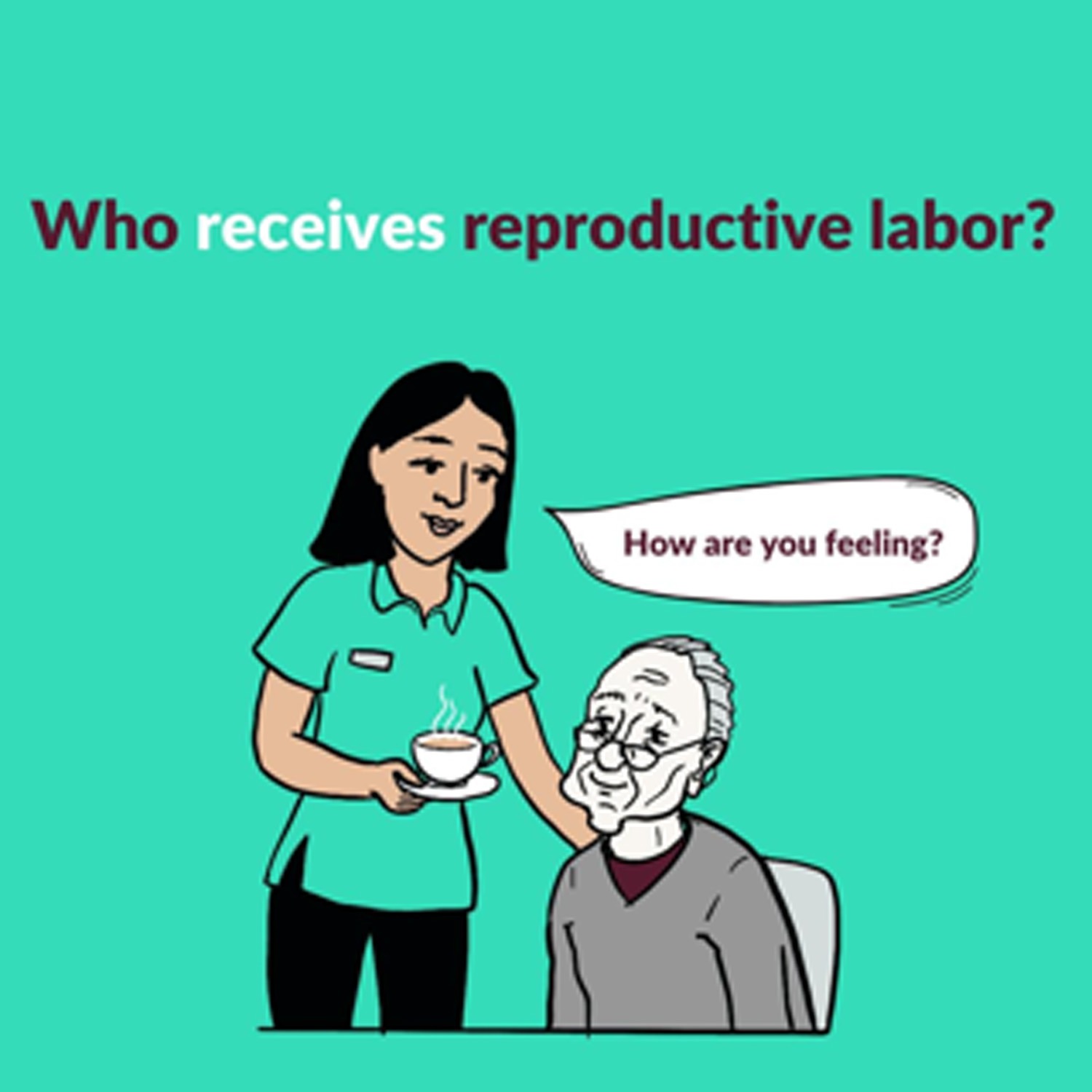 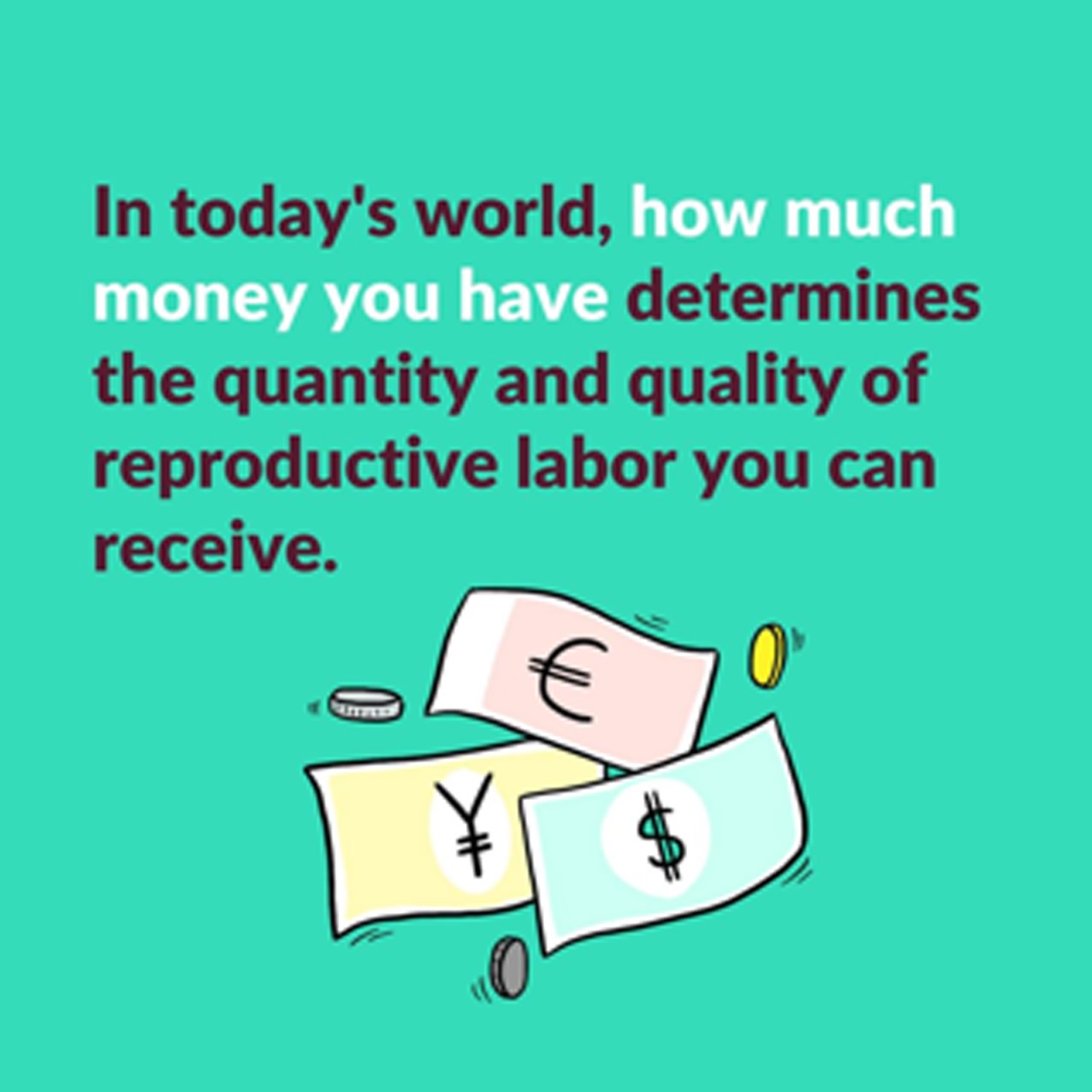 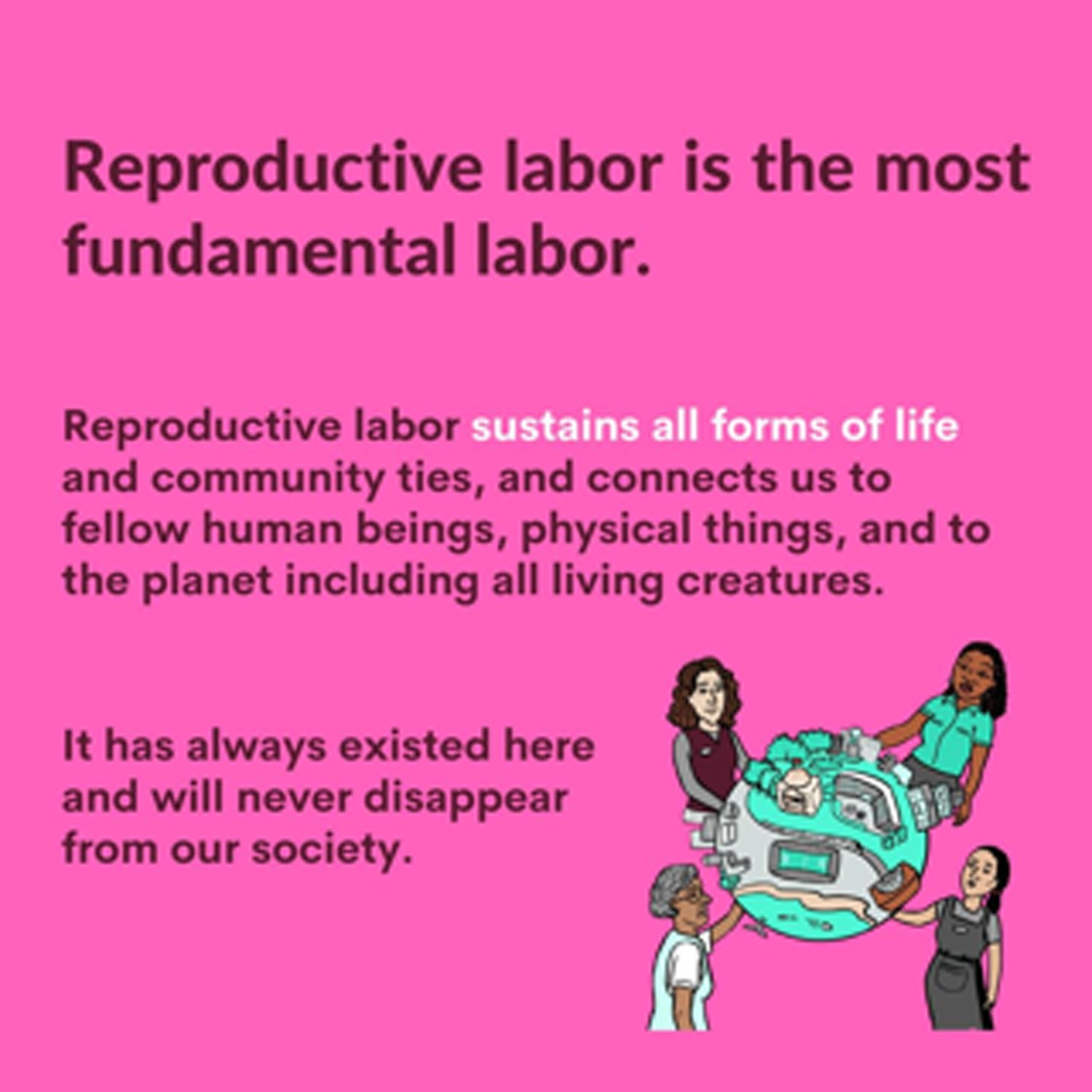 07: Jack, an undocumented domestic worker living in The Hague, speaks about The Center for Reproductive Labour, with a quote by founder Sakiko Sugawa, alongside a series of graphics created by the group.

“Aside from campaigning for the recognition of rights of migrant domestic workers, we are also campaigning to raise awareness across different sectors of the importance of reproductive labor, of which domestic work is a vital part.

The Center for Reproductive Labor is a project organized by Sakiko and her group in collaboration with Filipino Migrants in Solidarity (FILMIS). They are a group of activists that promote feminism, gender equality, human rights and environment. The objective of the project is to raise public awareness about the importance of reproductive labor in society.”

08: A project by artist Mary Hayman and Glynn Vivian Art Gallery which brought people together remotely during lockdown to create banners in celebration of Swansea’s 10 years as a City of Sanctuary.

09: A film by Jack and Joy of Filipino Migrants in Solidarity.

10: Paintings by the Glynn Vivian Art Gallery’s Welcome Group in Swansea. Some of these are self portraits, while some are of other volunteers, including Patricia and Laura who posed in traditional Colombian dress, and Ganimet and Kwesi in traditional Turkish dress.

We were chased out
Made displaced and refugees
Still we return
We rebuild our villages, cities and towns
We can never be knocked out and down
We are resilience

Our houses were burnt down to ashes
We rebuild from grass ose, pan body now to up-n-garet
We tie we belt
N win de fet

11: Resilience, by Alhaji Kamara, who sought sanctuary in Swansea in 2003 from the civil war in Sierra Leone, and currently lives in Birmingham.